[intro]Hawaiian Saimin Soup is a basic slurpy noodle soup. What makes this soup so unique is that you can add any toppings to it. Saimin soup is all about the broth and udon noodles.

This noodle soup can be made to anyone’s taste. You will love how easy saimin soup recipe can be.[/intro] 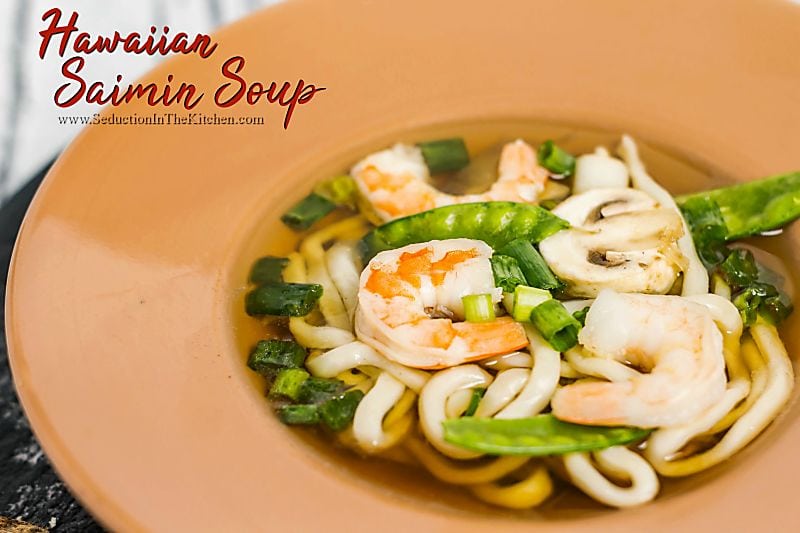 [dropcap custom_class=”normal”] T [/dropcap]he need to simplify in my life is there. I have been burning myself out doing 10,000 things. Part my problem is I never say no to anyone.

I am a people pleaser. It is who I am. But, it has been catching up with me.

Instead of me doing my own creative outlet of work, I have been helping others with theirs. It burns me out. So I need to go back to the basics, simplify my life.

Sometimes that is all we need. Go back to basics just so we can refuel our mental and well being. Simple and basic, it is the best cure for life. 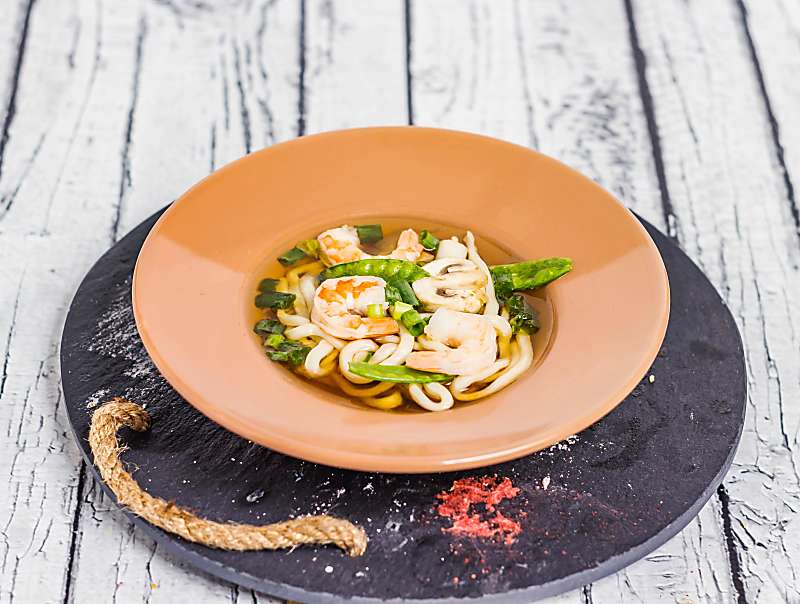 Looking for a slurpy noodle soup? Hawaiian Saimin Soup is an easy broth to make that uses Udon noodles.

Speaking of basic, some the most basic of soups is a broth soup. I got this cookbook from the bed and breakfasts across the United States. In it was this Hawaiian saimin recipe. 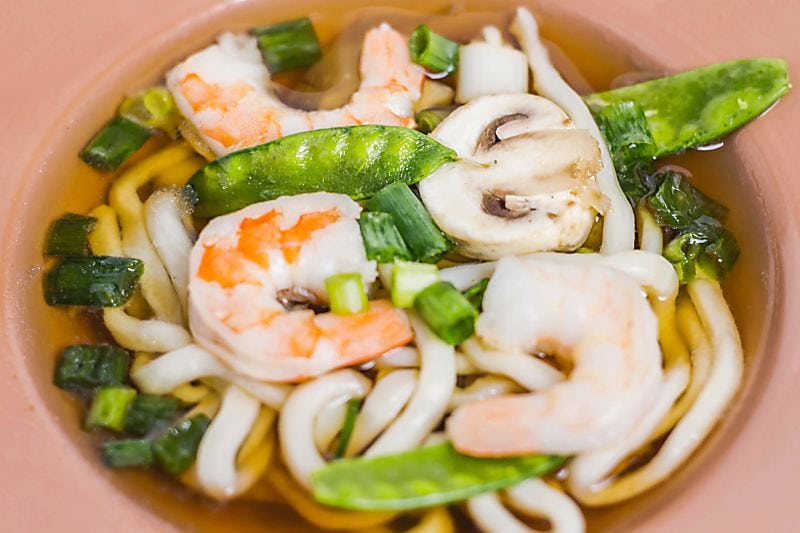 Hawaiian Saimin Soup can be made in 15 minutes!

The cookbook explained what Saimin soup is. hawaiian saimin recipe is a refrigerator soup is the bottom line. The saimin broth recipe is simple and you put whatever toppings in it. 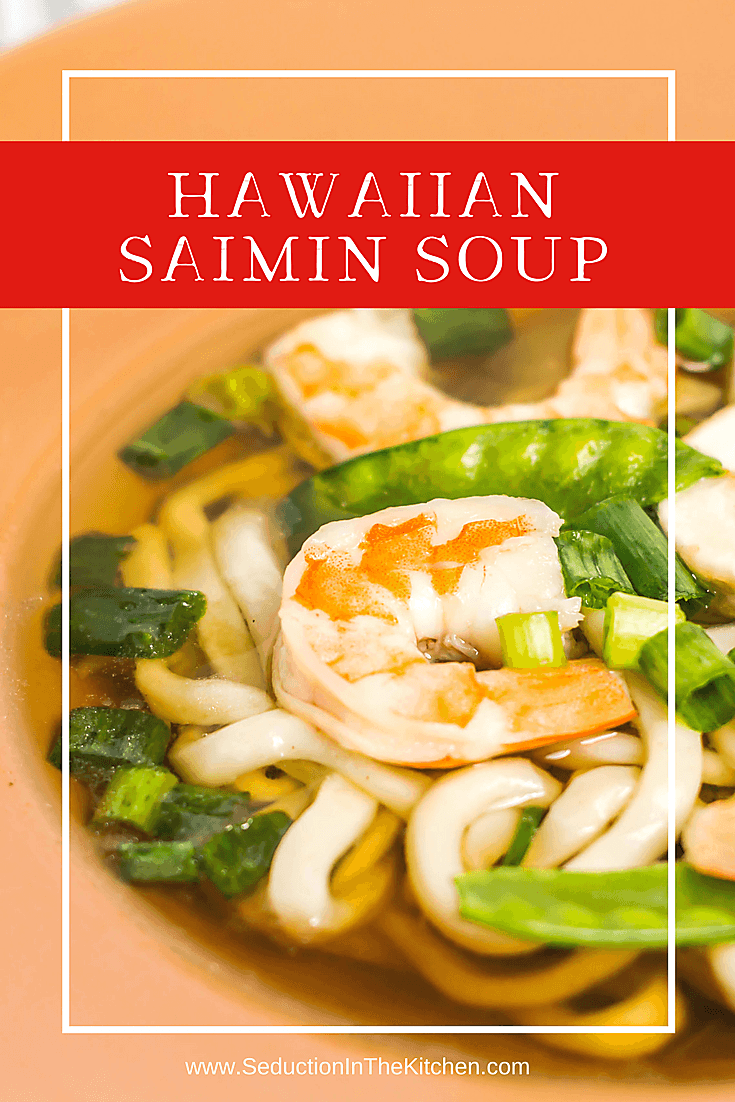 Pin this Hawaiian Saimin Soup to save for later!

Whatever you have you can put into the saimin broth. Slices of pork are more common to use for meat in Hawaii. I am not a pork fan. I love shrimp so I used shrimp.

[dropcap custom_class=”normal”] G [/dropcap]ET A MANDOLINE AND DON’T BE AFRAID TO USE IT.

Saimin Soup Base recipe can be made for anyone’s taste. What makes Saimin is the broth and the noodles. Hawaiian Saimin Soup is a slurpy noodle soup.

You will love the flavor of the broth in saimin soup.

The saimin soup recipe in the cookbook called for noodles that my grocery store did not carry. I used Udon noodles instead. I decided to use the oriental flavor packet in place of the ginger for the saimin broth.

The substitutions made a good choice. This Hawaiian saimin recipe was good. Especially for this crazy weather, and everyone getting sick.

What I love most about this saimin broth recipe is it can be made in 15 minutes. Using the substitute ingredients in my version of saimin soup base recipe helps with making this a quick and easy recipe. 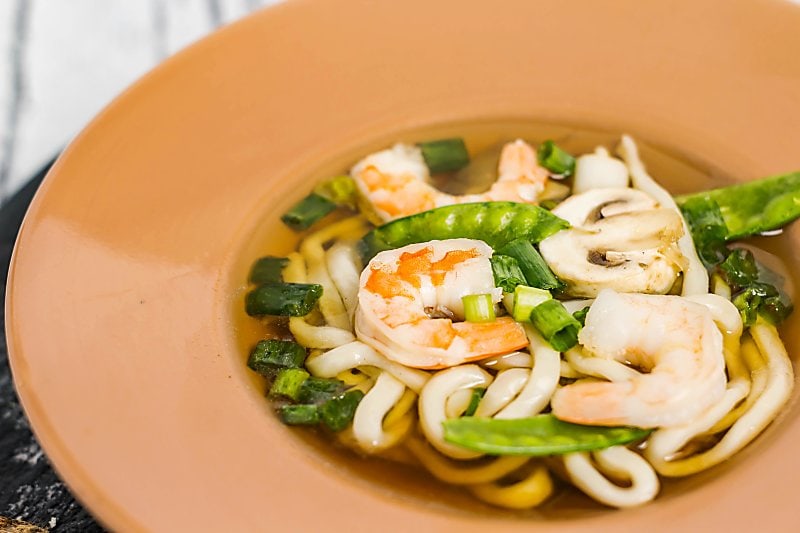 You can get very creative with this soup. The combinations are endless! The nutrition is for the broth since you can add whatever toppings you like to this soup!

Udon noodles are my favorite! Everything about this soup is so up my alley, I need to try it!

Mmmm... This soup looks so light and delicious! And I like the fact that you've used shrimp here - they add such great flavor to everything! Hope you have a chance to slow down soon... Take care!

When it comes to soup it is all about the broth! This looks amazing and those udon noodles have the best texture!

Yes it is! A good broth is good for slurping!

I agree.. simplifying is definitely needed at times. This has all of my favorite things in it.... loved it!

Soups are my favorite meal!! This sounds really yummy!